Time to catch up!

Once again I seem to have been far too busy to post anything and I've been fiddling around with the layout of the blog. Still not got it right!

May was busy with lots of dyeing and the best way to show you is to post some photos. Who says natural dyes are boring?! 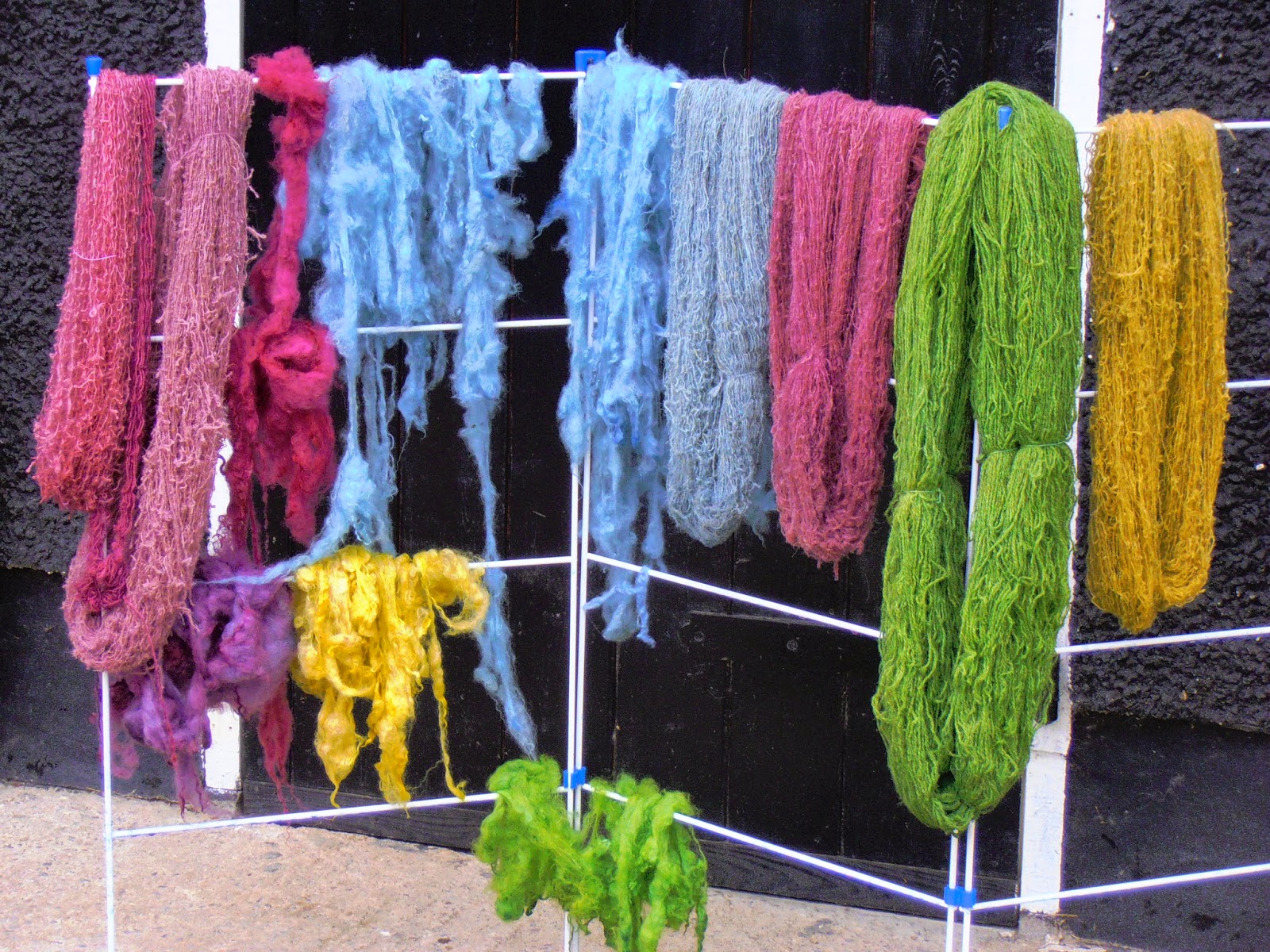 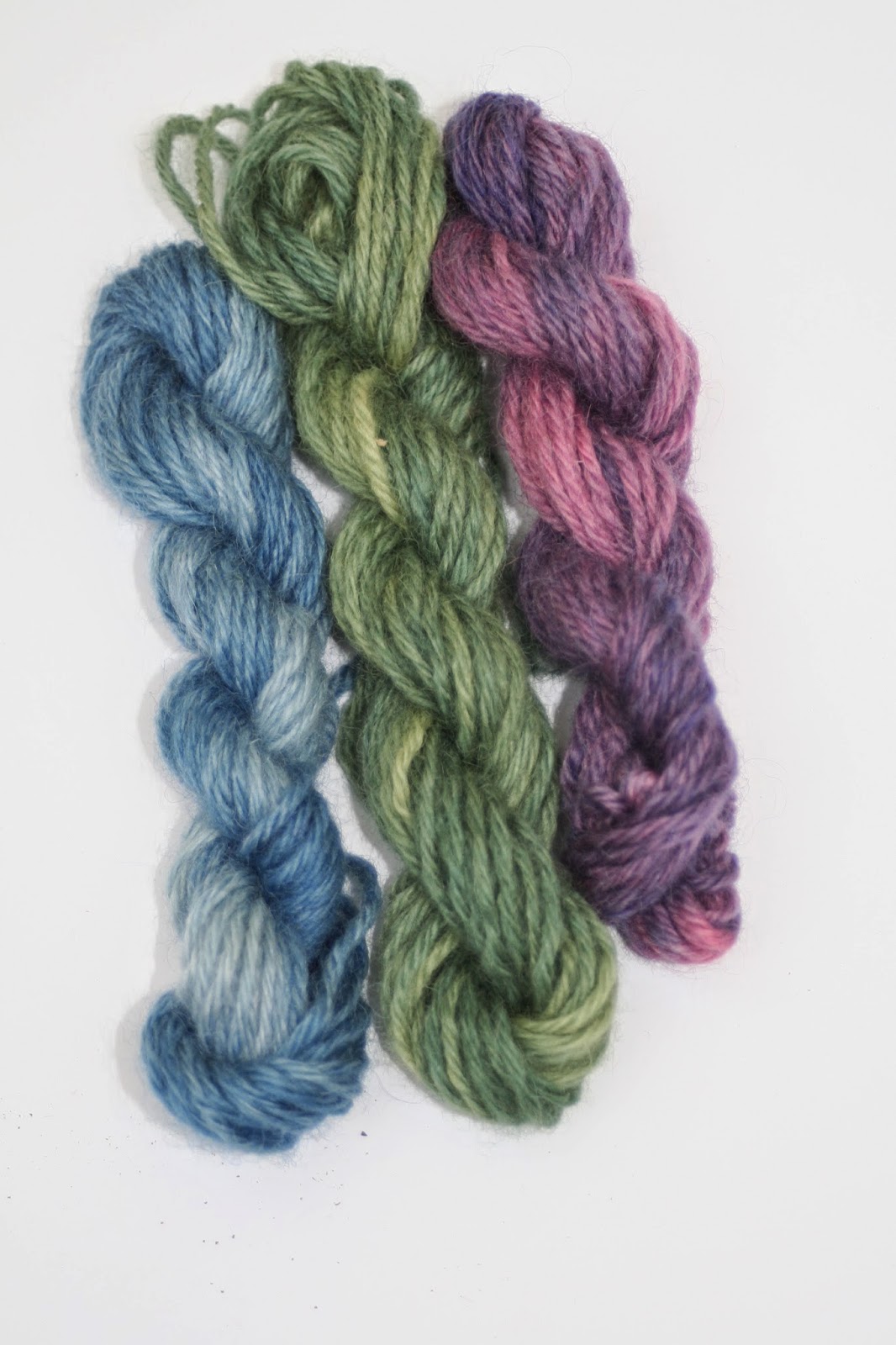 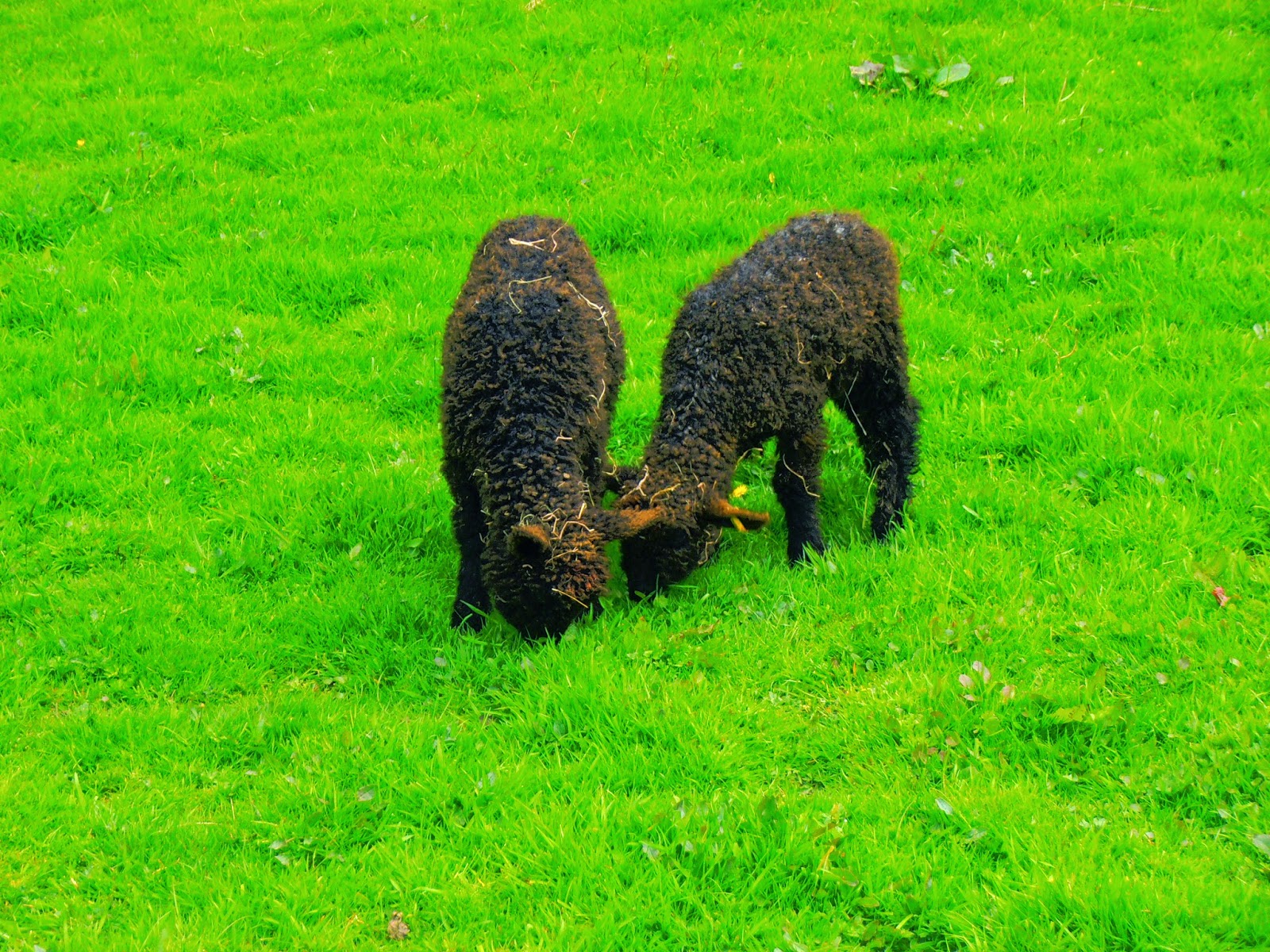 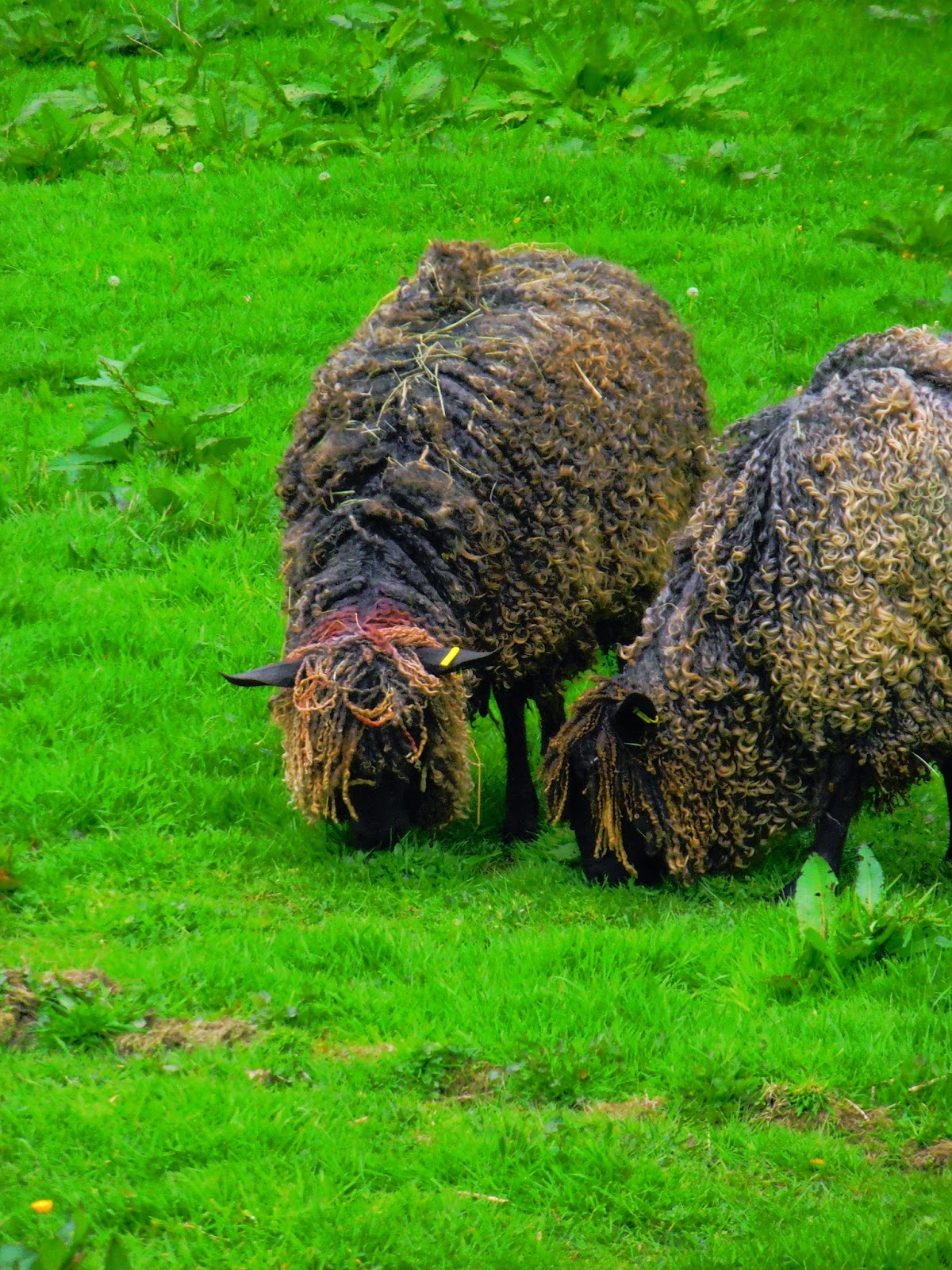 So what else have I been doing? Well the silkworm season is in full swing and I have caterpillars chomping away all day and all night. I have been asked to give a talk at the V&A in October, and hope I will have some live cats to take with me. The Eri moths are continuously brooded, so as long as they don't eat us out of privet, I might have some of those. The photo at the left shows a large tussah caterpillar and some baby eri caterpillars for size comparison - there is about 4 weeks age difference and the tussah will be spinning soon.
The other caterpillar is a calletta and you can just see a new, incomplete cocoon in the centre of the photo with the caterpillar still visible within it. Within a few hours the cocoon will harden and the cat will be out of sight until it emerges as a moth. 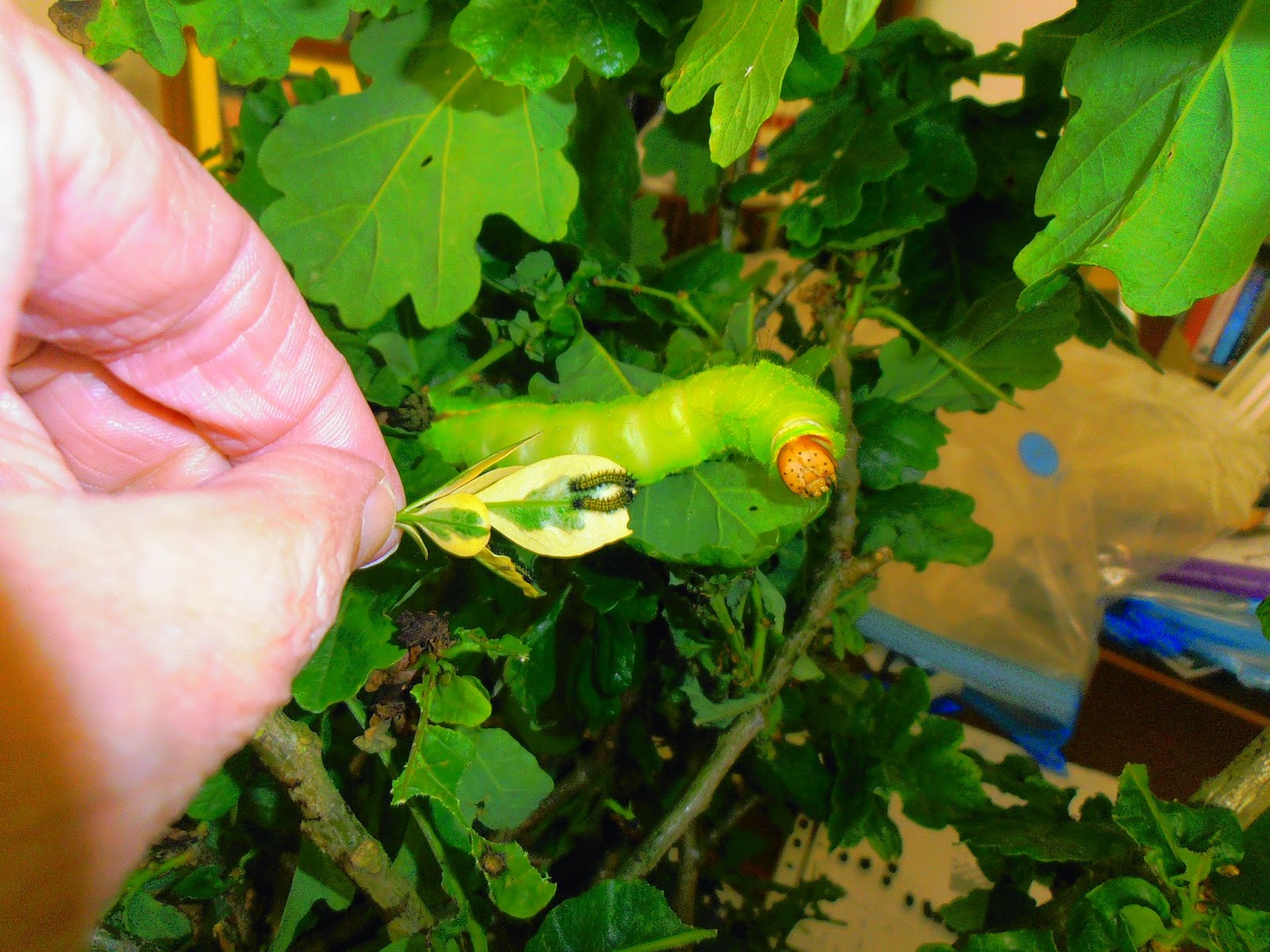 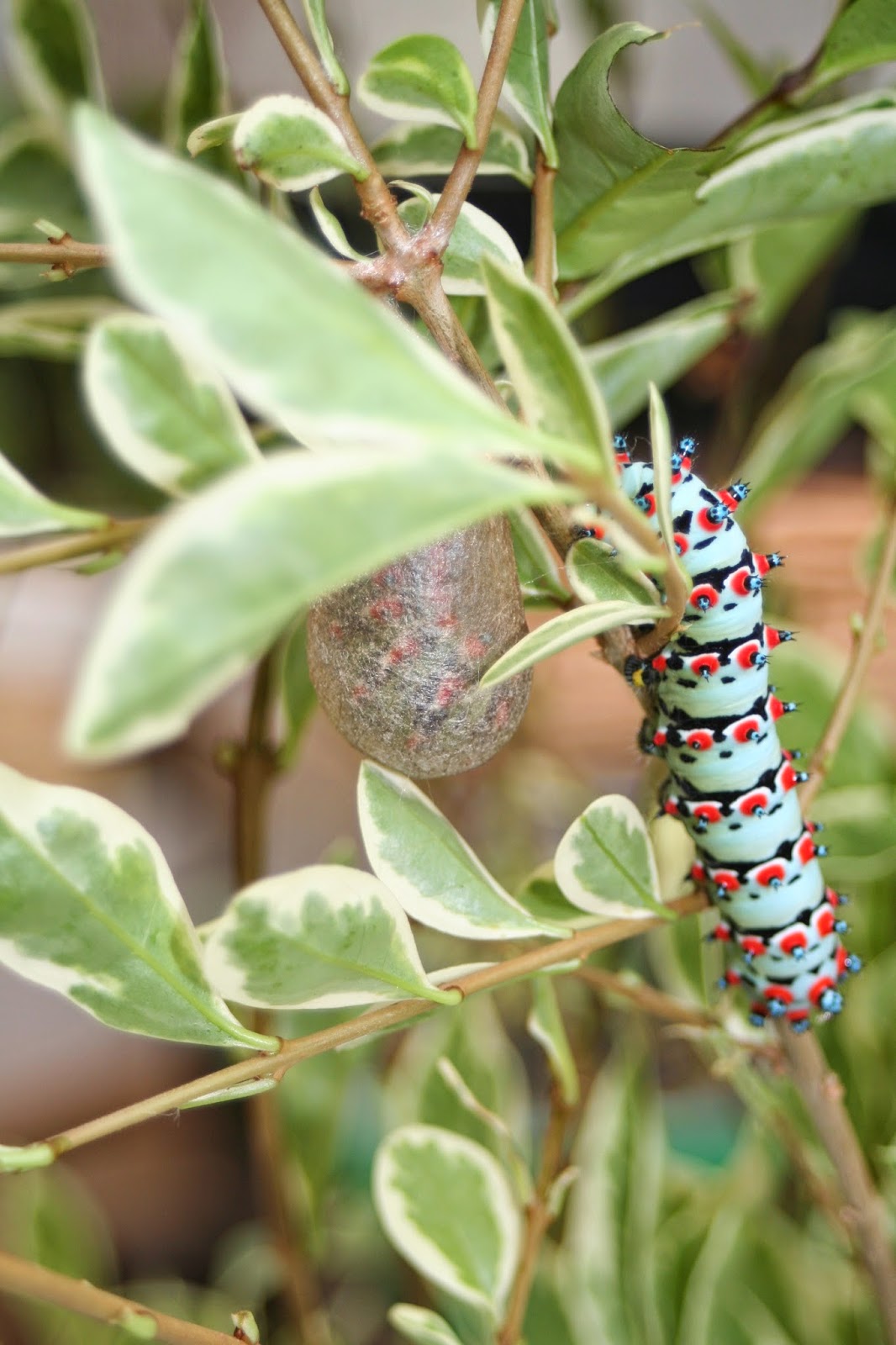 Not done a lot of spinning but I've been washing fleece, all summer it seems, though have speeded up considerably since I've been using the fermented suint method - soaking the fleece in rainwater in a warm spot until the natural cleansers in the fibres do the job for me. This is not the same as just soaking in cold water - it needs to be warm, a lid needs to be on the soaking vessel and the fleece needs to be quite greasy, at least to start the bath. The drawback is that taking the lid off to inspect the contents can be quite an unpleasant experience - if you don't like farmyard smells, I don't recommend it. Now the fibres are clean I can get on with my next excitement, using the knowledge I gained in the most fantastic week long course with the superb Michel Garcia. I am an unashamed Garcia Groupie!

Before I move on the dyeing, I am going to post some pictures of one of this year's courses at the Bovey Tracey Contemporary Craft Fair. I taught Katezome, or flower hammering, in the morning and indigo resist in the afternoon. I don't have any photos of the afternoon but the morning produced some fantastic results. 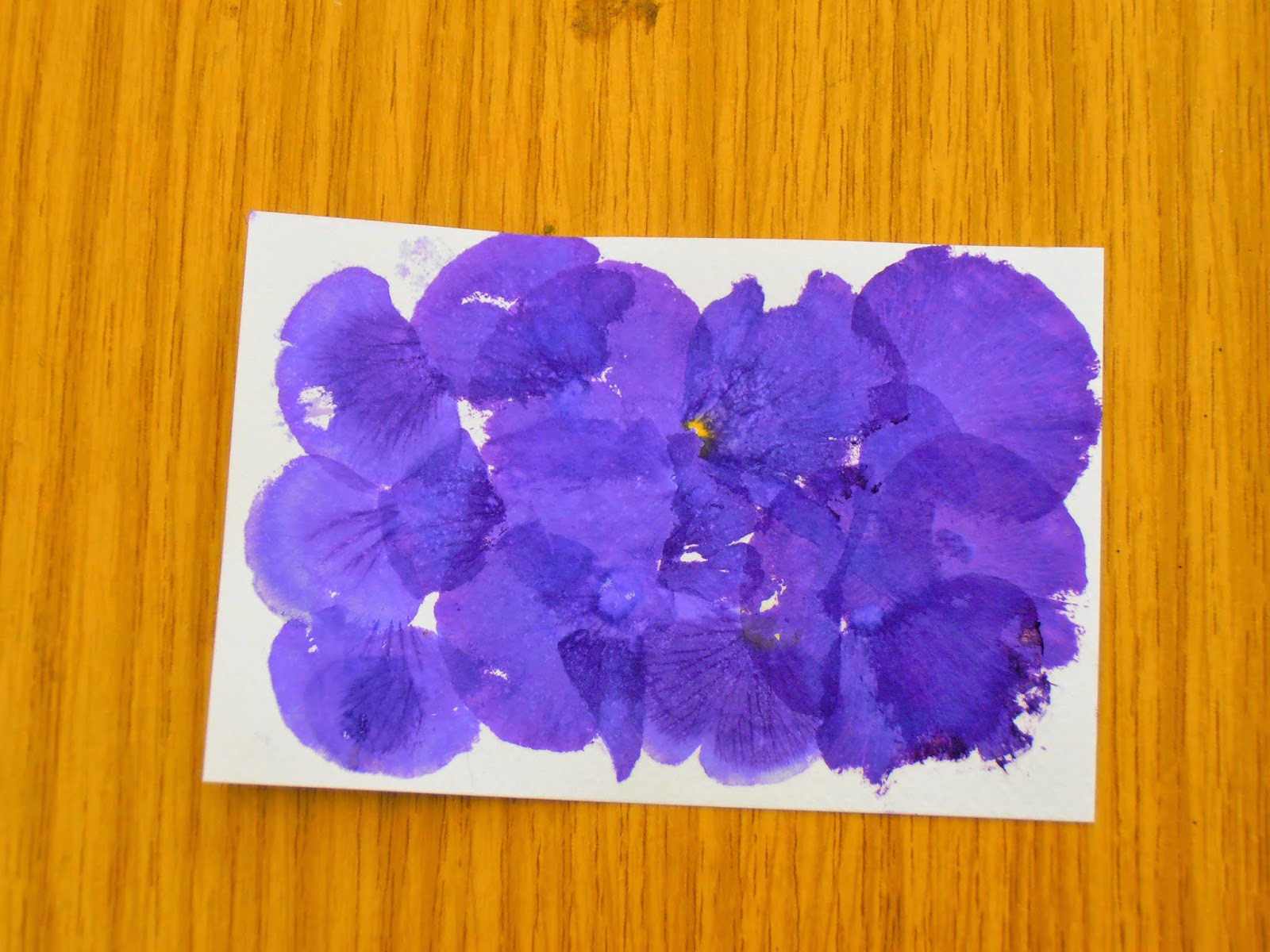 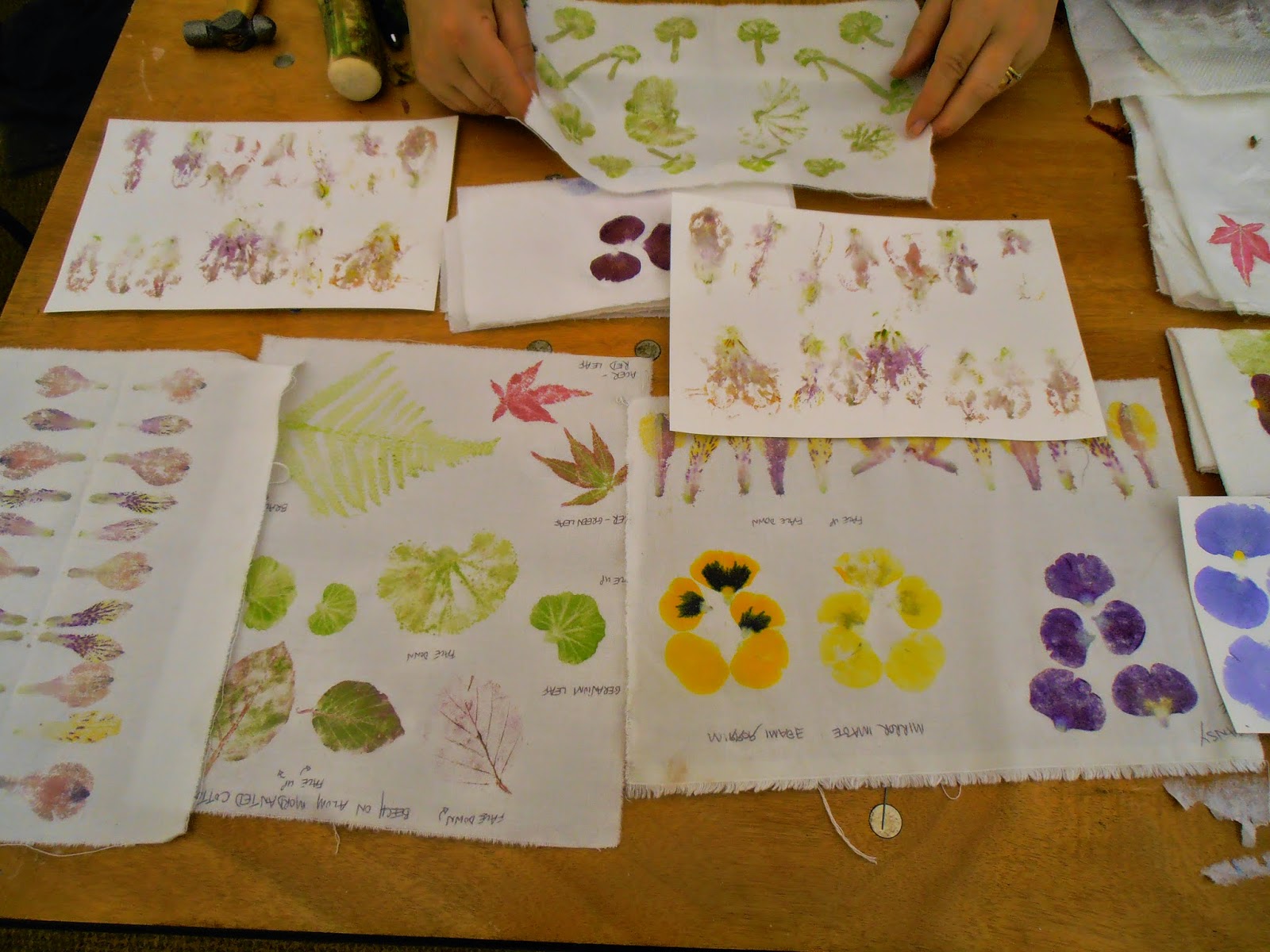 The results were impressive, although the colours will fade quickly unless they kept out of the light. For a special card for a birthday or Christmas card perhaps, they are lovely.

Last week was something very special! I spent it at Chateau Dumas, about an hour from Toulouse, in beautiful surroundings with superb food, excellent company and one of the best courses I can remember - and I've done a fair few, including one with Michel in 2011! Michel Garcia is a treasure and we should all be so grateful to him for the amazing amount of research he has done to enable us to dye easily and safely with natural dyes. The details are for another day but these photos might give you a flavour of what we experienced. 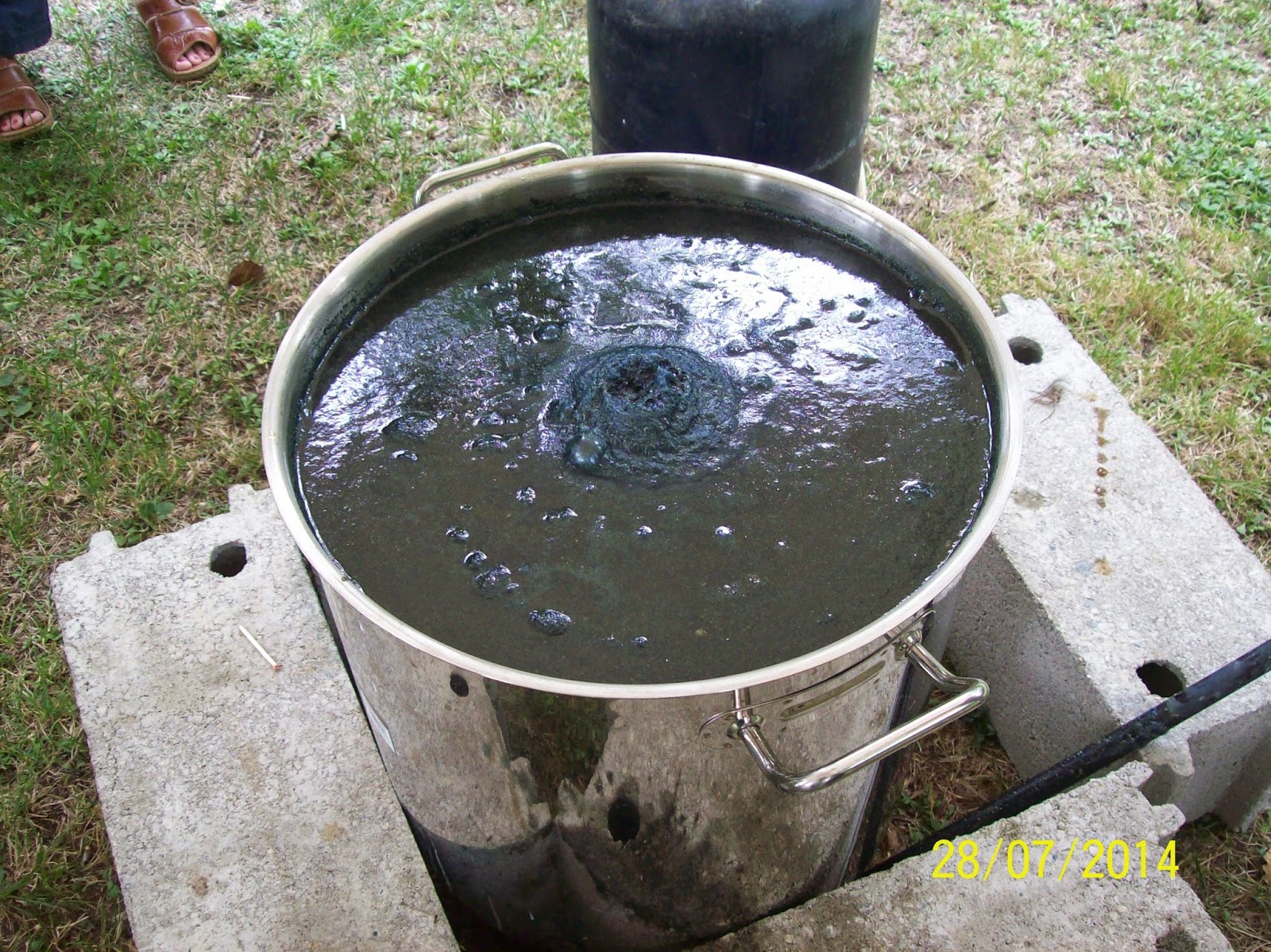 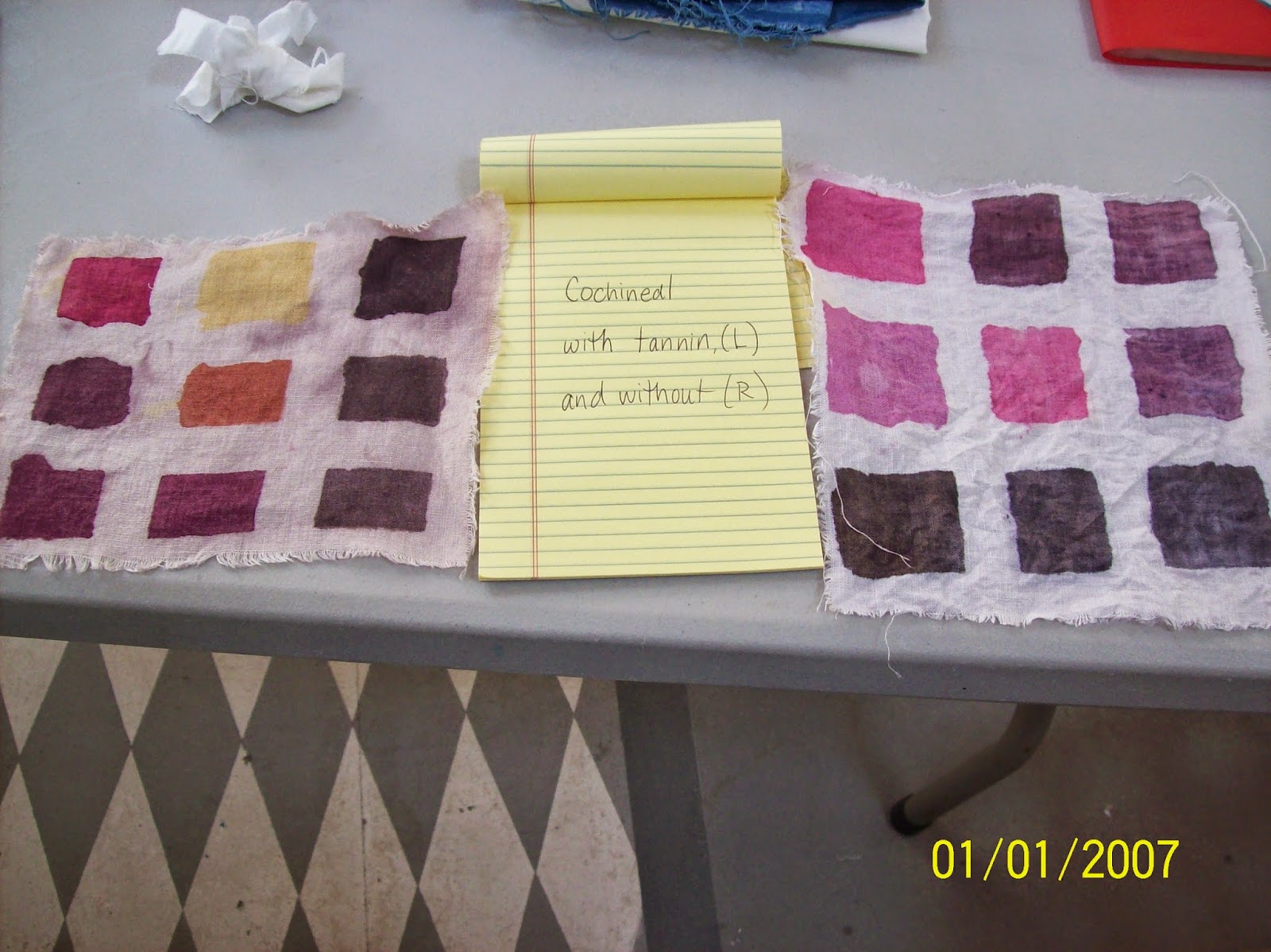 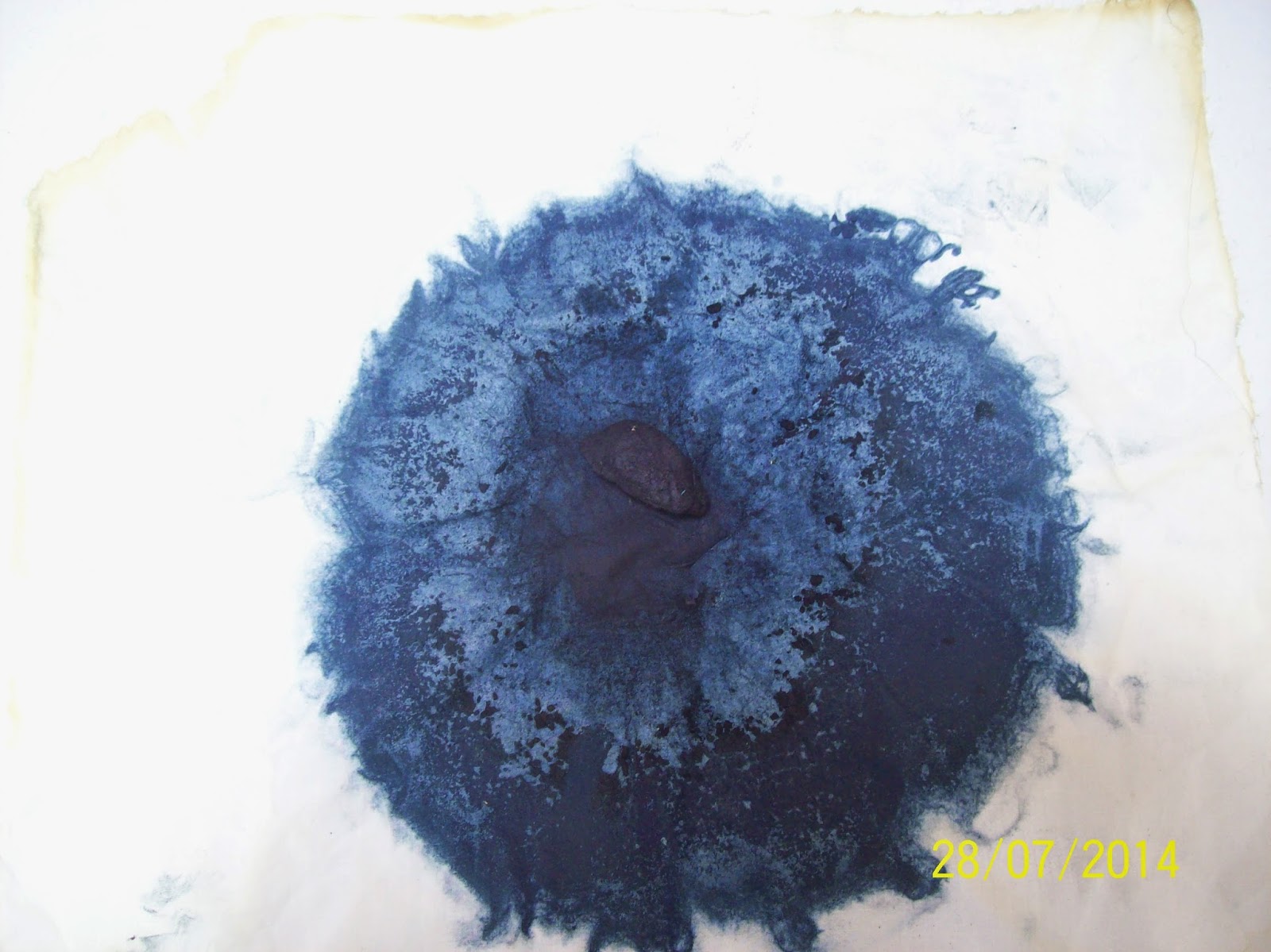 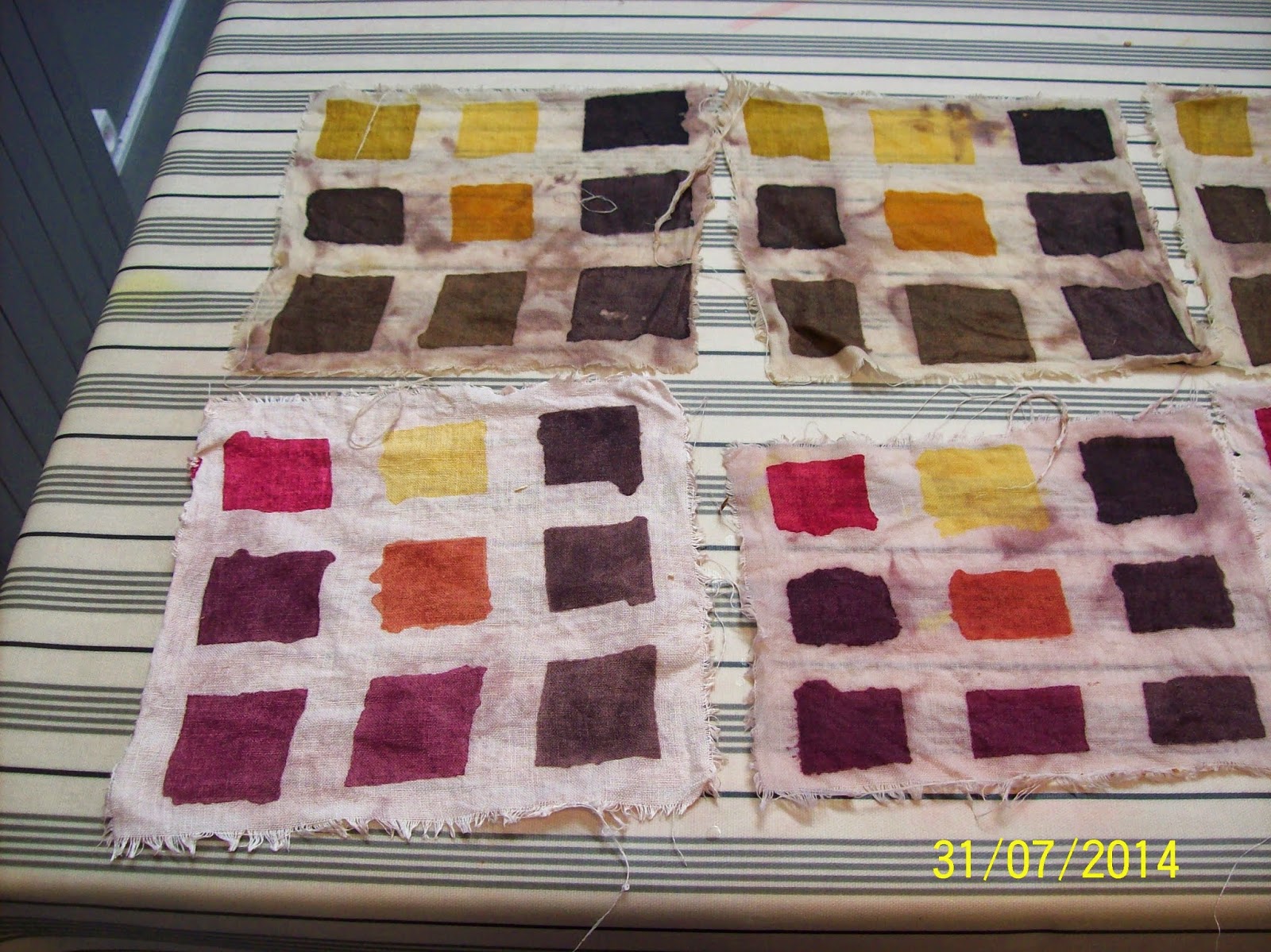 More in the next episode....
Posted by jane d No comments:

I should have done it yesterday...

I am thinking of starting a new blog with the title of this post as its name! I seem to have been chasing deadlines for months now but have finally, I hope, got to a point where I can reach the next 4 - or is it  5 - with a degree of equinamity.

The dye plants are beginning to show their faces again, either the perennials popping up or the seeds germinating, including the cotton. Last year's flax awaits retting when the weather warms up a bit and the this year's seeds are on order. Traditionally they are supposed to be sown by Easter but I was much later than that last year and still had a good crop.

The photo below shows some of the colours from the solar dyed Wensleydale fibres using plants from the dye garden and indigo from the vat I made using Jim Liles Saxon vat: A dirty fleece is put into a container of water and left in the sun for 24 hours. The fleece is removed from the smelly, filthy water and well dissolved indigo, together will a little washing soda if the pH is a bit low, and left to reduce. In the meantime, the fleece is scoured. When the vat has reduced, the clean fleece is re-entered and dyed blue. It is such a satisfying process, to use nothing but water, fleece and dye, plus the heat of the sun, to achieve the chemistry necessary for the indigo process. It's not for the faint-hearted though, as I have to admit that I can see now why  Elizabeth I did not allow dye works within 5 miles of her residencies, the smell is dreadful! But it goes when the dyed fibres are washed.
The blue at the bottom of the basket is the indigo, the blue at the top of the basket is woad - another favourite of mine. We have walnut, red dahlia, madder, weld and marigold as well - the yellows from marigold and weld are rather washed out in the photo and are much stronger in reality

I've washed a huge amount of fleece that somehow seems to have appeared in the workroom but before I get too smug, I have to remember the sacks in the garage and the shed....Still, I started on one fleece, drum carding and spinning into a chunky single on the Ashford Country Spinner and the wheel is gobbling it up at the rate of knots! 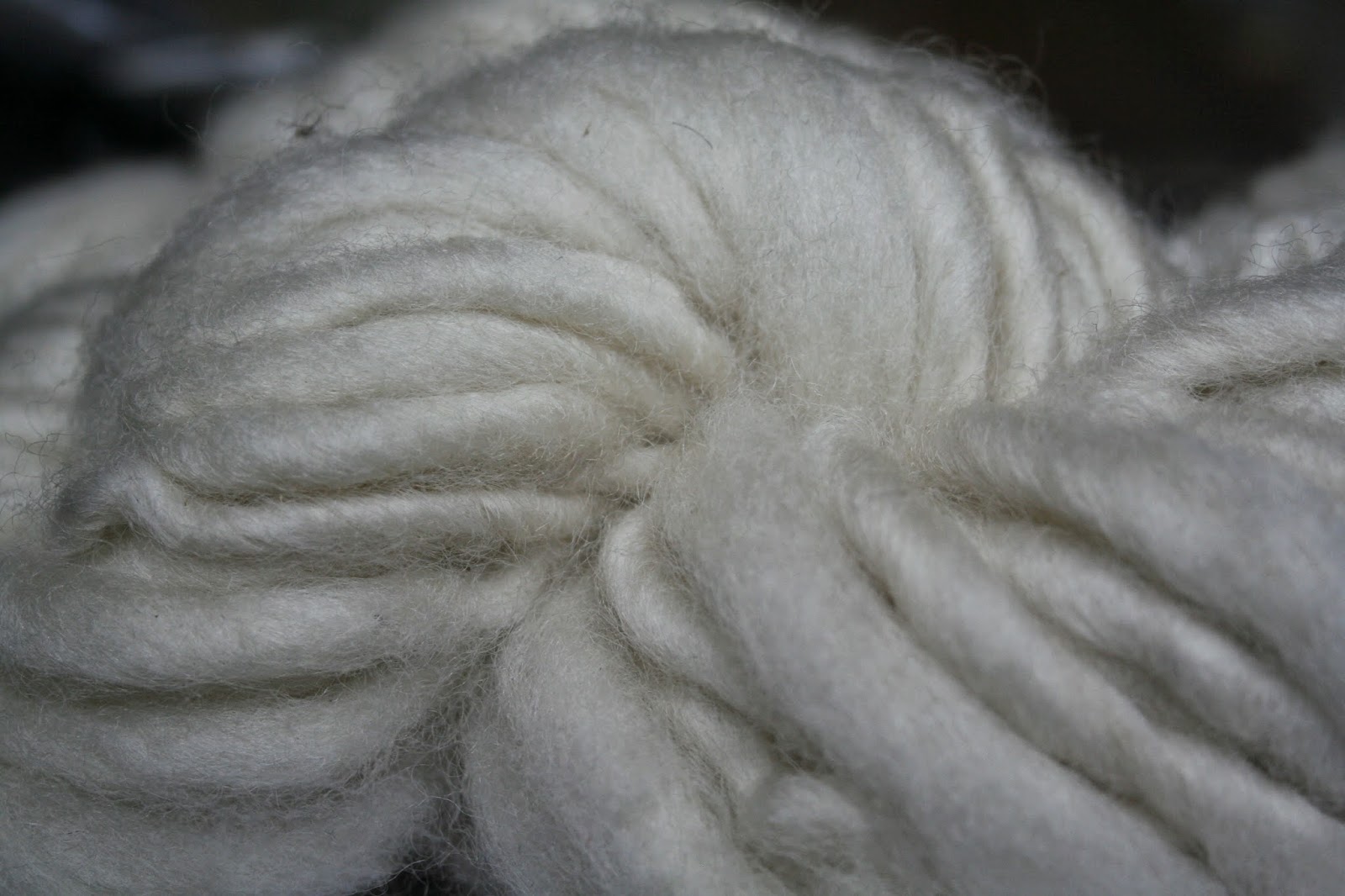 I am dyeing some greens as a commission and have so far been using a variety of yellows; marigold, weld and pomegranate and modifying with iron but will be making an indigo vat for some brighter greens either on Sunday or next week - helps with indigo if the weather is a bit warmer than it currently is!

Tomorrow will be a good day, I think. At Peter Tavy Guild we are getting together as weavers and those of us who are a bit more experienced will be helping new people to get started. It's always exciting to introduce weaving to someone who hasn't done any before and see that amazing moment when the weft crosses the warp for the first time and instead of threads and air, there is suddenly fabric! Well, maybe it takes two or three weft picks, but you get the idea.

Spinning is starting again in earnest at Leewood on Thursdays from April 10th. lambing may have started again by then, or it may not, depending on how the sheep feel about it! I am keeping everything crossed for some black lambs - we had one last year but she sadly didn't make it past a few months - at least we know there are black genes in the flock, Wensleydales and one black mongrel ewe! She should throw a black lamb, we hope! Lots of lovely pix of the sheep on the Leewood website, plus dyed fibres and yarns.

The silkworm season has begun, or at least the cocoons are out of storage though none of them seem inclined to wake up just yet. This year, although I have several workshops for which the silkworms are an integral part, I am trying not to panic and buy in more. It usually results in both overwintered and new moths all emerging at the same time and then we spend our lives running up and down the hill to the oak trees as the eggs they lay hatch and we have hundreds of hungry little caterpillars to feed.

Links to sites I enjoy

Etreme R is a tiny one, with the full size for that instar and two 2nd instar babies

The black baby will be the size of the green monster in about 4 weeks!